The Municipal Development Company of Trikala city, E-trikala S.A participated in the Major Cities of Europe Conference (http://www.majorcities.eu/) that took place in Zagreb at 11th-14th of June 2017

During the Conference, e-trikala had the opportunity to promote and disseminate via posters, brochures and presentations three European Projects that are under implementation this period in the city of Trikala.

To be precise the projects presented are the following:

ACTIVAGE (a HORIZON 2020 EU funded project) : ACTIVAGE Project is an initiative that focuses in meeting the challenge posed by the ageing of the population via solutions entailing the use of the Internet of Things, reducing the negative impact involved in chronic disorders and degeneration http://www.activageproject.eu/

Den CuPID (a project that runs under the auspices of the State Scholarships Foundation (IKY), the Hellenic National Agency of the Erasmus+ programme). Den CuPID is a Strategic Partnership (SP), which aims primarily at improving transversal competencies, such as entrepreneurship and managerial skills, and enhancing knowledge in the field of cultural management. It envisages the optimization of local capacities in designing and implementing projects based on the local cultural endowment, as well as the ability to involve financial and innovative funding tools, for the accomplishment of these projects. ( http://den-cupid.eu/en/)

iHEeRO (an EU funded project receiving funding from the European Union’s Connecting Europe Facility (CEF) – Transport Sector under grant agreement no. INEA/CEF/TRANS/1031743): this project is considered the continuation of HEeRO and HEeRO2 projects and focuses in implementing an eCall service triggered either manually by vehicle occupants or automatically so as to either prevent or detect an accident.  http://iheero.eu/

The persons that attended the conference were, the C.E.O of e-trikala, Mr. Odysseas Raptis and Mrs. Christina Karaberi who works in the Department of Research and Communication of the company. 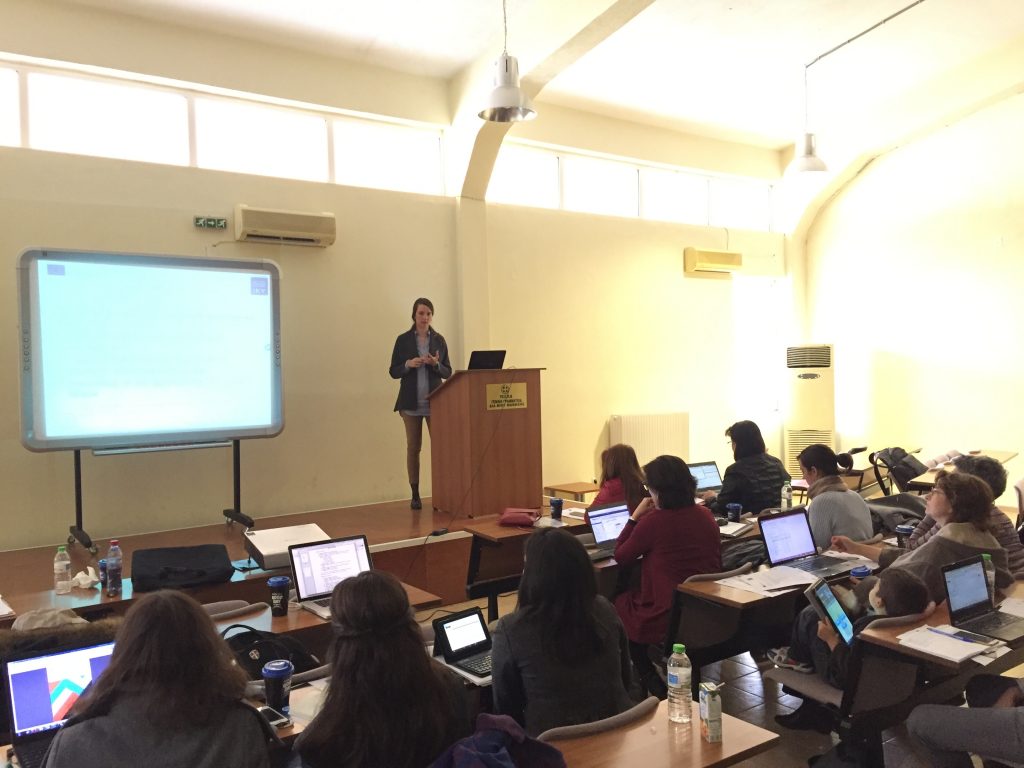 The Digital Education Network for Cultural Projects Implementation and Direction, which was held in Trikala on November 24 and 25, 2016, was successfully completed at the E-Trikala Operational Control Center

The Den-CuPID program, which will last for two years and is sponsored by the State Scholarship Foundation (IKY), which is a Public Decentralized Service  of the Ministry of Education, Research and Religious Affairs, and has the status of National Coordination Unit of the Erasmus + Program for Education and Training, aims to establish Strategic Partnerships to promote and disseminate good practices on the proper management of cultural and tourist actions and tools, as well as on the search for viable business plans for the development of tourism, promotion of local products and use of historical monuments.

Representatives of all 8 partners participated in the workshop, and a representative of the Municipal Authority, Deputy Mayor of Education, Culture, Sports and Youth, Efi Leventis.

Welcome to the web portal of the project DEN-CuPID, the Digital Educational Network for Cultural Projects’ Implementation and Direction.

DEN-CuPID is a Strategic Partnership (SP) between SMEs, academic institutions and local authorities’ associations, which aims primarily at improving transversal competencies and at enhancing knowledge in the field of cultural management.

The project has a duration of two years and is implemented under the auspices of the State Scholarships Foundation (IKY), the Hellenic National Agency of the European Erasmus + Program for Education and Training.

It envisages the optimization of local capacities in designing and implementing projects based on the local cultural endowment, as well as the ability to involve financial and innovative funding tools for the accomplishment of these projects.

Through four mobilities it will prepare young cultural practitioners to develop the competences to work in heritage management.